I stumbled upon this amazing video. It was captured by an audience member during a Shamu Adventure, with adventure being the key word here. The media called it a Killer Whale Attack.

The video caused my eyes to well with tears, not because the Orca was trying to hug it’s trainer by holding in underwater repeatedly, or when the trainer tried to get out of the pool the whale pulled him back in. Yes, there were some really tense moments when I thought Yikes, not a good idea to swim with a Killer Whale! But when I saw the resolution I had one of those PMS-induced, happy-hallmark-card, weepy moments.

We all know that horse training comes complete with innate risks but nothing like Orca training. Here’s a man, like a fish out of water, in the water just hanging out with one of the most powerful, sharp-toothed marine mammals. He has only his relationship with this whale to protect and guide him.

This is the ultimate brain-to-brain relationship. Forget about brawn-to-brawn. He has nothing besides the whale’s understanding of his cues and rewards with him in the pool. No whips, ropes, no force or possible threat of force. So when this whale began improvising by dunking his trainer during the performance there was nothing that could be held over that whale’s head to make it behave. Like, “You better stop that or I’m gonna whack you!”

I love the ending to this video. Right when you think the trainer is a gonner, something must have happened underwater and suddenly the whale stops swimming. You see the handler, finally, above the water, gently soothing the whale with long soft strokes as it rests calmly on its side. Wow. I was so astonished to see that the handler didn’t even look nearly as shaken as I would have expected him to look after being bashed by a whale. I get the feeling he knew exactly what to do to reach the out of control orca.

It’s proof that positive reinforcement, attraction-based relationships work, even in some crazy situations. This gives me lots of hope for me and my land orca. 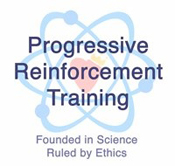 All of the material on the pages of this weblog, I Feel Good, My Horse Feels Good, is copyrighted. This protection includes but is not limited to the articles, photographs, video and Horse Pucky cartoons. All rights are reserved.

As with all things equine and their inherent risks of potential for injury to horse and human, the exercises and examples of the things I do with my horses fall into the category, Try at your own risk. I cannot assume responsibility, and neither can my horses.

With that in mind, I hope you enjoy your time here!